Jeff Lemire’s The Underwater Welder is a powerful example of how graphic novels / comics can be just as artistic, important, and poignant as traditional literature.  The story follows Jack, an underwater welder for an oil rig.  Jack and his wife are expecting their first child, but Jack is struggling with issues from his own childhood and his relationship with his father.

Jack feels an overwhelming need to be alone, and the only place he can find the peace and quiet to deal with his thoughts is underwater welding at work.  The story takes some surreal and unexpected turns as Jack deals with his past and ultimately tries to answer that nagging human question, “Who am I?”  In the introduction to the book, Damon Lindelof describes it as “the most spectacular episode of the Twilight Zone that was never produced,” and that describes the book perfectly.

Lemire’s art is simplistic and raw, which really captures the isolation in the story and Jack’s state of mind.  Lemire uses large panels liberally with minimal text, which also highlights the internal contemplative aspects of the story.  I had an English professor who said that in good literature everything is there for a purpose.  Nothing is superfluous.  The craftsmanship and vision displayed in The Underwater Welder is the perfect combination of writing and art to create a powerful story.  It is good literature.

I highly recommend The Underwater Welder.   The book is over 200 pages, but reads very quickly.  And then you will want to read it again to figure out how Lemire captured so much story and emotion with black and white simplicity and sparse text.

I seriously doubt there will be a better graphic novel released in 2012. The Underwater Welder is published by Top Shelf Productions. 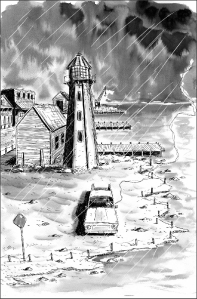 One thought on “The Underwater Welder by Jeff Lemire”